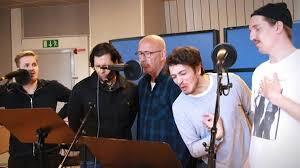 When you go and see a play or a movie you can see if the actors are happy, sad or angry on their facial expressions when they talk. When you listen to a play on the radio you cannot see anyone, you have to decide whether they are happy, sad or angry only by listening to the actors. The actors have to think about how they express themselves and how they sound. Now you are going to do the same thing. You are going to think about have you use your voice when you want to express or say certain things.

You are going to write a short play for the radio in groups of four. The play will only consist of a dialog and the role of the observer (people that are thinking to themselves. This has to be noticed somehow in the recording). I prefer that you do not use a narrator (but you can use one if/when it is needed). The dialog should be minimum 3 minutes.

The Scenario: Four or five people are trapped in an elevator that stops because of an outage at 18.10 on a Friday evening in December. No one has a cellphone or anything else that makes it possible for them to contact anyone on the outside. They cannot get out until after a long time(at least until midnight).

The people in the elevator are:

Try to portrait the people, make them as real as possible by showing how they are through what they do, how they are saying things and what they say about themselves and each other.

Deadline for the assignment is 1/12 (when you should be done with your recording) and you will play your theater for the rest of the class the following lesson the 4/12.