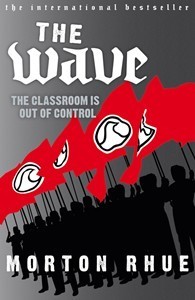 The Wave by Morton Rhue

Write down words from the text that describe these characters:

What have the following pictures to do with the book and what do we get to know about the man and the time?

Who is Robert? What do we get to know about him?

Do you agree or disagree with these statements?

Eric: I would never let such a small minority of people rule the majority.

Brad: I wouldn´t let a couple of Nazis scare me into pretending I didn´t see or hear anything.”