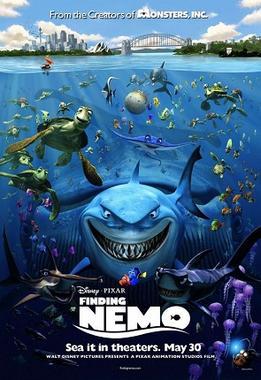 Finding Nemo - An animated movie about the little clownfish Nemo, Marlin and Dory. You are going to watch the movie and then write a review.

Watch the movie. Write the text on a paper.

1) The story
Write a short summary. When and where does the story take place? What kind of story is it; detective story, science fiction, comedy, love story? What is the most important sequence of the film?

2) Characters
Who is the main character of the film? Are there more than one? Describe them as well as you can. How do they look? How old are they? How do they act? Do they change during the film? What are their relations to each other?

3) The setting
Where does the story take place? City - countryside, rich - poor, indoors - outdoors, in the water - on land?

4) The message
What is the message of the film? Why did the producer make this film and what does he/she want to say with it?

5) Your opinion
What is your overall opinion of the film? What did you like? What did you not like? Was it easy or difficult to understand the film with or without the English subtitles? Was the ending as you expected it to be or would you like to change it?

Remember that you always have to explain why you think as you do! Try to give examples from the film to support your opinion?